well, tomorrow's (Jan.30,2010) the big day for us, we have seen the entries, and believe me, it will be a really hard to pick only 3 of the 16 entries. well, good luck to all the contestants! we will be posting the winners on monday, and all the scoops on toysrevil. : ) we are also revamping our official website, so please bear with us while its still under construction. anyways, here are some of the games ive been playing for the week:

PS3
Final Fantasy XIII - if you checked around the internet, a lot of negative reviews was written about the game, in fact, a magazine in HK said it is the greatest swindle in gaming history. well, lets look at it this way, the story is one thing we rpg gamers want, and i think the drama and story in this game is quite alright. the gameplay from chapters 1 to 10 is linear, you cant go wrong even if you dont understand japanese. but chapter 11 is where all the fun starts, gran pulse is a really really huge place. the gameplay may be repetitive but i think all jrpgs are the same, we farm and farm till we get all the ultimate weapons within the game. when the US release comes out, try it. you might get hook just like me :)

Darksiders - Legend of Zelda twilight princess + diablo + devil may cry = darksiders. well, it is literally those 3 games mixed up together, and i admit, its really good and addictive. vigil put all the good points in those game into darksiders and what you get is a fun, puzzle solving, non stop action/strat game. you play as war, one of the four horsemen, and the story revolves around who framed you etc etc. the graphics is superb, the sounds is eerily similar to god of war and twilight princess.

PSP
Army of two 40th day - i didnt like the first army of 2 game released on the ps3/xbox360, it was too gears of war for me, been there done that. but the psp version is quite alright, the action is nice, the gameplay is like a top down shooter where you use the buttons to shoot. try it out, its a nice game to waste your time :)

Kurogane no Linebarrels - well, im a fan of the series, and this game satisfy me as a fan. the gameplay is part turn based rpg like the srw series, and the other part is like the persona series where you choose what to say. definitely a must have if you like the linebarrels anime.

Valkryia Chronicles 2 - the 1st part was released on the PS3, and its a satisfying turned based strategy game., and since watching the anime series, i was hooked on the characters. the game introduces some new characters, but the gameplay is still the same as the first one.

oh, did i mention that there will be a shin megami tensei game for the ps3? it may be a rumor but it got me all excited!! happy gaming!
Posted by Rotobox Vinyl Anatomica at 7:57 PM 1 comment:

Big thanks to Tomopop for including our Ganmetall Celsius OG figure in their Best of 2009 list for designer vinyls!
Link

Posted by Rotobox Vinyl Anatomica at 8:44 AM No comments: 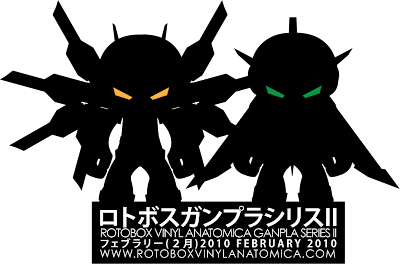 Posted by Rotobox Vinyl Anatomica at 5:42 AM No comments: 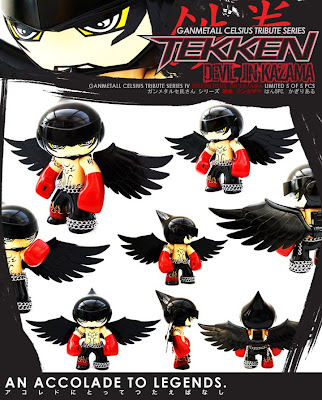 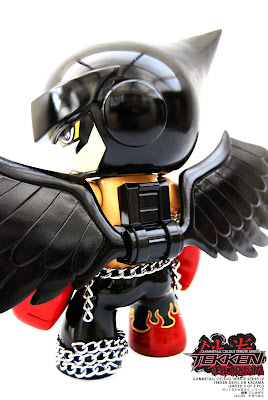 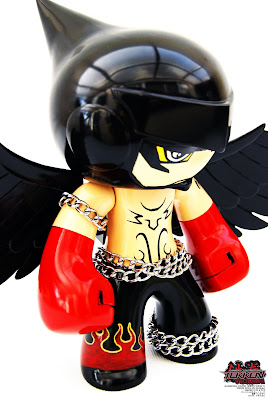 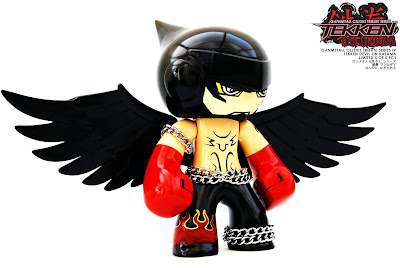 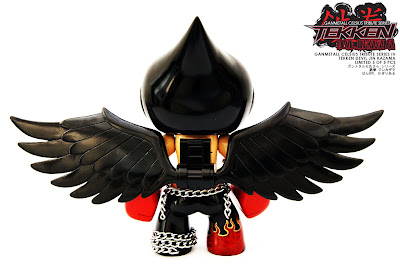 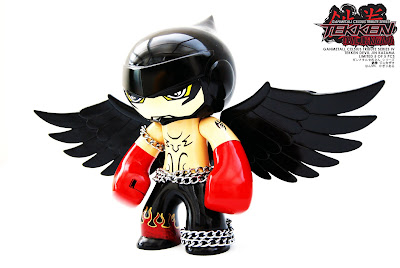 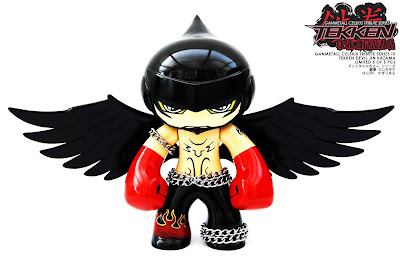 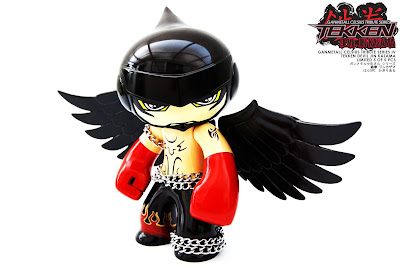 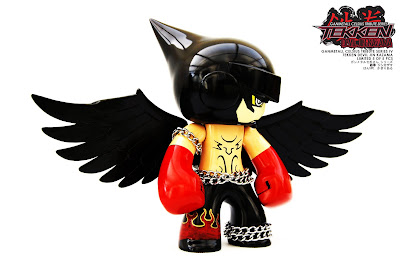 Ganmetall Celsius Tribute Series 4 - Tekken's Jin Kazama! Edition of 5 and is now available at our online store :)
Posted by Rotobox Vinyl Anatomica at 1:55 AM 2 comments: 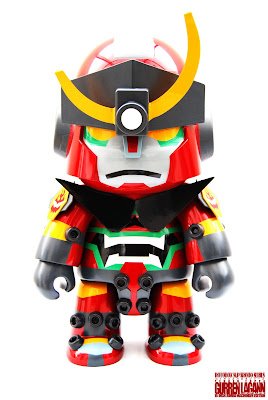 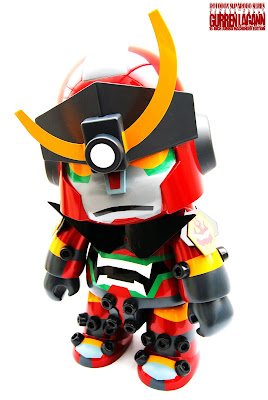 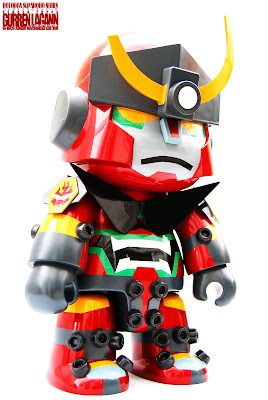 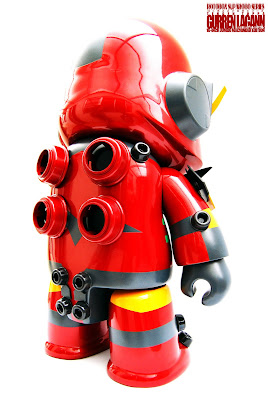 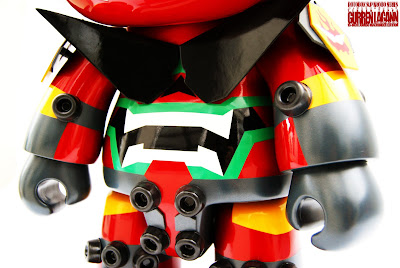 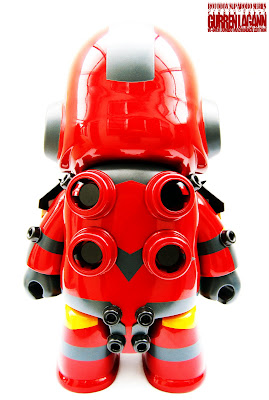 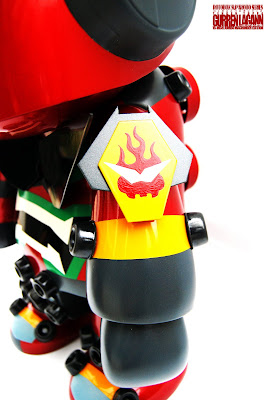 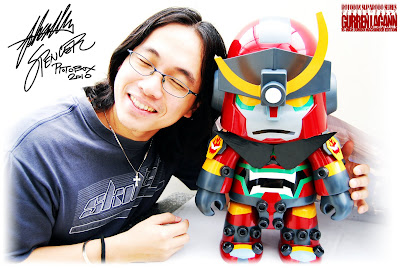 Here's our latest custom on our Rotobox Suparobo Project Series 6 - a 16" Gurren Lagann qee! At first, we were planning to do 2 separate figures which is Gurren and Lagann and have them literally combine just like the anime, but bec of time constraint, we didn't push through with it (maybe in the future!). To show that this truly is a 16" qee, we've included a picture with me (spencer) together with Gurren...it's embarrassing but it's ok...for the love of designer toys :P we love you gurren!

Posted by Rotobox Vinyl Anatomica at 5:03 AM 2 comments: 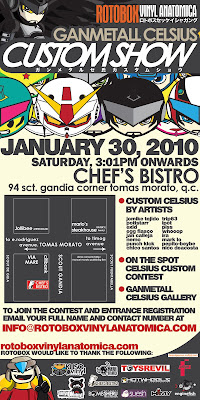 Posted by Rotobox Vinyl Anatomica at 7:44 AM No comments:

hello, happy new year to everyone! well, its 2010, and we kick off the start of the year by doing our first ever ganmetall celsius custom show. we are crunching our time to finish off our tribute series 4 and the much delayed suparobo series. we will be releasing the figures on the 3rd week of january. :)

well, for the gamers out there, here are some of the games ive been playing, oh, btw, gundam unicorn will be released next month! cant wait!

PSP
Half minute hero
at first the game's kinda dull, but once you know how to play it, its really fun! 30 seconds of non stop action, there is little strat involve, but the story is really funny. you can download the demo on psn

Gran Turismo
over 800 cars to collect. wow. for a psp game, that a lot of farming hehe, the best thing is you can transfer your collection to the upcoming gt5 coming this march, so you can start collecting your cars right now! the gameplay's good, and the graphics are nice too for a psp game. the adhoc multiplayer is a lot of fun. highly recommended!

PS3
FFXIII - still playing final fantasy hehe, havent played any new games yet. but january will have a lot of nice releases, including last rebellion and ar tonelico 3

well that's it folks, i havent been playing quite awhile since we bought a digital piano, im learning the basics for now, but i hope i would become a great virtuoso one day :D ciao amigos!
Posted by Rotobox Vinyl Anatomica at 6:29 AM No comments: