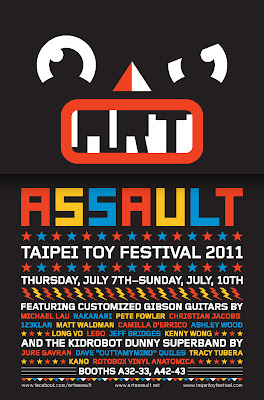 Art Assault, the charity art show that unites music with visual arts and designer toys is going international—fittingly bringing along its unrivaled collection of customized guitars by international art stars. From the show’s conception, Outta My Mind Creations and Mai Hiro in partnership with Gibson Guitars had imagined a tour to share the creativity and spirit of Art Assault to people around the globe. Now, that reality is made possible as they have teamed up with Sweemie & Co./Summit to bring their unique show to the beautiful and exotic Asian island of Taiwan. In fact, Art Assault will be a featured exhibit at the 2011 Taipei Toy Festival on July 7-10th.

All of the 11 guitars from the first Art Assault show, which took place at Art Basel Miami 2010, will be exhibited for this pop-art loving audience of Taiwan to enjoy. With an emphasis on electric guitars and designer toys, the incredible artists went beyond conventional designs and created truly unique works of art. The artists are Michael Lau, Nakanari, Pete Fowler, Christian Jacobs, 123Klan, Matt Waldman, Camilla d’Errico, Ashley Wood, Long Vo, Lebo, and Jeff Bridges. To make each location of the tour fresh, we are adding a new artist to join the original amazing line-up. Hong Kong artist Kenny Wong (kennyswork) will customize an Epiphone Les Paul II guitar for the show. Also, the Kidrobot Dunny Superband by Jure Gavran, Dave “Outtamymind” Quiles, Tracy Tubera, kaNO, and Rotobox Vinyl Anatomica will be making its overseas debut as well. Kidrobot has happily agreed to continue their support with giveaways to make the show something to delight the masses. At the exhibit, new merchandise and designer toys will be showcased, along with several scheduled artist signings including Dave “Outtamymind” Quiles and Spencer Ong of Rotobox Vinyl Anatomica .

Every stop on the tour brings yet another opportunity to have art and music collide to rock minds and hearts! 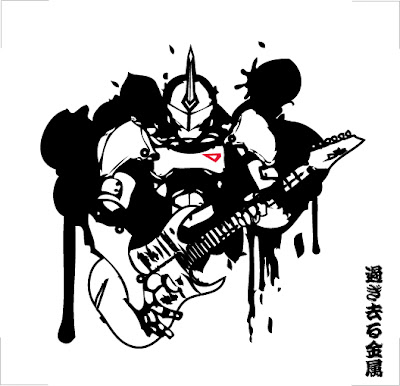 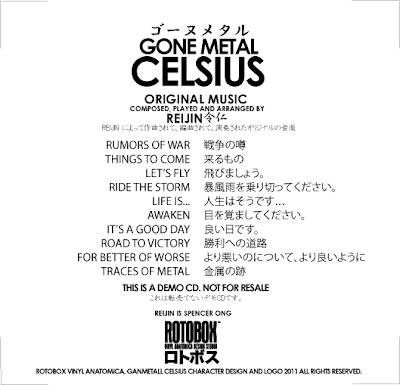 Above is the art design for the "Gone Metal" Celsius demo cd.
It has 10 instrumental guitar tracks composed and played by Spencer, 1/2 of rotobox. Spencer has been playing the guitar for many years and it has always been one of his passions. Limited quantities will be available at TTF.
And hey, you can also have the cd doodled if you like!

To listen to some of the songs from the cd, visit Reijin's FB page. 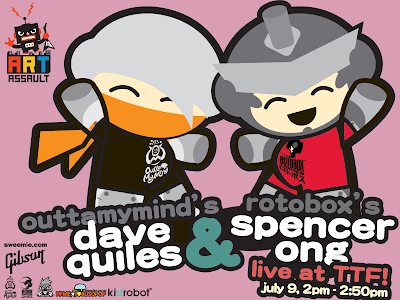 Don't forget to catch Dave Quiles and Spencer Ong on July 9, 2pm to 250pm!
Aside from the Gone Metal Celsius cd, there are also lots of stuff available at the event at very special prices. Some of the items are Artist Proof OG celsius, Zero Degrees Celsius, Kurogane Fahrenheit (only one of each will be available), several DIY celsius, Urban Forest Jewelry by Dave Quiles (Awesome stuff!!), TTF exclusive Art Assault tees designed by several artists and more! So don't forget to drop by the Art Assault's exhibit booth :)
Posted by Rotobox Vinyl Anatomica at 9:29 AM No comments: 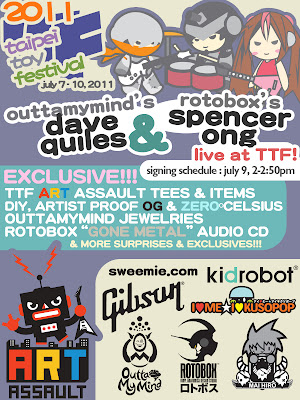 Art Assault goes to Taipei Toy Festival!
See the customized guitars and custom mega dunnies on July 7 to 10, 2011.
Rotobox's Spencer and OuttaMyMind's Dave Quiles will be at the event with a signing schedule on July 9 from 2pm to 250pm at the Art Assault's Exhibit Booth.
Exclusive items will be available during the event.
Posted by Rotobox Vinyl Anatomica at 7:26 AM No comments: